Guy started sub-aqua diving in 1994 completing his BSAC Novice Diver course in Cyprus through the military.  Apart from a couple of dives in Greece and Turkey on holiday his first real experience of sub-aqua came on a week long military diving aptitude at Horsea Island, best described as ‘a bit of a thrashing!’  Between 1997 and 1999 he was based in Manchester and joined the Trafford SAC where in addition to a number of, very cold, quarry dives he also dived in Scotland (Troon and Oban) and the Dominican Republic; during this time he also qualified as a Sports Diver.  The next couple of years were a bit busy with work and sub-aqua took a bit of a hit although he did still manage to do some dives on the South Devon coast, Portland, Gozo and South Africa.  In the Summer of 2003 he joined, what was then, the Plymouth Command Sub-Aqua Club and has been a member of the Club ever since.  For the next 4 years he dived regularly with the Club in Plymouth, as well as the occasional dives in Florida, Mallorca and Crete, qualifying as a Dive Leader and Open Water Instructor.  However a mixture of a young family, Operational Tours and weekend commuting meant that between 2007 and 2012 he didn’t dive at all, although did qualify as a Diver Coxswain and for part of this time was the Club Treasurer.  2012 to 2015 saw a return to fairly regular diving, including instructing, with the Club before a change of job meant another enforced break.  However to maintain a link to sub-aqua, between 2013 and 2017 Guy was the Chairman of the Royal Navy and Royal Marines Sub-Aqua Association; guiding the Association through a fairly turbulent period as key changes to Service Sub-Aqua Diving Regulations were introduced which had a profound impact on the clubs (not least the PDCSAC).  After 27 years in the Royal Marines he is now ‘semi-retired’ and spending more time with his family (home being on the edge of Dartmoor) and going mountaineering, orienteering and sailing in addition to his diving. 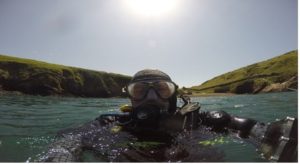 Steve learnt to dive in 1979 when he completed the Royal Navy Ship’s Diver and Supervisor course and has been diving ever since.  He’s been a member of 4 different military dive branches over the years but has always returned to PDCSAC where he’s been a member for 20 years.  Steve is a BSAC National Instructor and First Class Diver and is an active member of the Instructor Training Scheme training and examining instructors from entry level to Advanced Instructor.  He is also a member of the CCF Dive Team and helps to teach over a hundred 14 to 18 year old cadets a year on Ocean Diver and Sports Diver courses base at the CCF AT Centre in HMS RALEIGH.  Between 2005 and 2012 Steve ran the Joint Service Sub Aqua Diving Centre at Fort Bovisand where he did over  1,000 open water teaching dives (plus quite a lot of fun dives!).  Steve is a current Sub Aqua Diving Supervisor (SADS) and SADS Assessor. Steve has instructor qualifications from PADI, Disabled Diving International, DAN and Technical Diving International in addition to the BSAC and altogether has over 20 different instructor qualifications from Boat handling to Closed Circuit Rebreather.  He is currently leading one of the teams producing the new Diver Training Programme for the BSAC.  He has managed to dive all over the world from the Arctic Ocean to the South China Seas but still thinks Plymouth offers some of the best diving to be had – but a puddle will do if there’s nothing else!

Communication portal and much more for Plymouth Defence Community SAC